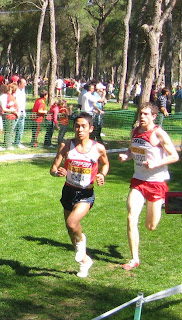 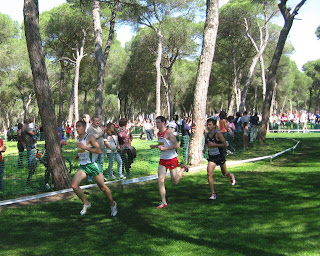 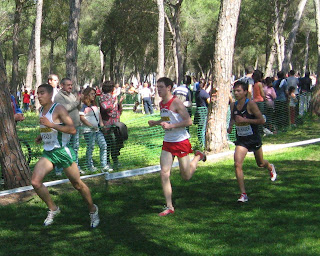 Track North Athletic Club's Ross Proudfoot, (Lively, ON) was the top
finishing Canadian at the 39th IAAF World Cross-Country Championships
contested today in Punta Umbria, Spain.  Competing in the Junior's Men's
8 kilometre race, Proudfoot finished in 49th position with a time of 24
minutes and 53 seconds. Canada placed 12th in the team event beating out
teams from Spain, Algeria, Russia, Brazil and Tunisia.  As expected Kenya
and Ethiopia battled it out for top spot with Kenya eventually taking the
gold and Ethiopia settling for silver. Uganda won bronze.

Canada entered teams in both the men's and women's junior (19 and under) and
senior races and Proudfoot's performance was the best of any Canadian on the
day.

"Ross had a great race. He went out confidently, took a risk with a fast
start and hung on well. He had a good battle going with some of the
Americans and finished strongly" commented Team Canada Head Coach, Dave
Scott-Thomas following the race.

Proudfoot could not be reached for comment immediately following the race
and is currently in transit back to Canada.

"To place in the top half of what is considered the hardest running race in
the world to win, and to again lead the Canadian team is an impressive
accomplishment" commented Proudfoot's Track North coach, Darren Jermyn.
"Ross has come a long way in the past year and its exciting to think of what
he will do in the future."

Posted by plabrecque at 9:52 PM

Track North Athletic Club's Ross Proudfoot (Lively, ON), competing for the
University of Guelph, claimed the bronze medal in the men's 1500m event at
the Canadian Interuniversity Sport (CIS) Indoor Track and Field
Championships held this weekend in Sherbrooke, Quebec.

Proufoot made a strong move over the final 200 metres of the race to move
from fifth place into a potential medal position.  Proudfoot then timed his
final lean at the line perfectly to win the bronze medal in a new personal
best time of 3 minutes, 49.68 seconds, just outleaning the fourth place
finisher by 2/100's of a second.  Proudfoot's teammate, Kyle Boorsma, won
gold in a time of 3 minutes, 47.57 seconds.

"I ended up eating a bit of track with my lean and fall at the finish line
but I very happy to have won a medal and to have finally broken 3:50 for
1500m - it's been overdue" commented Proudfoot following the race.

Proudfoot will now turn his focus to again competing for Canada at the IAAF
World Junior Cross-Country Championships in Punta Umbria, Spain on March
20th.  Proudfoot will lead the Canadian squad against the world's best 19
and under cross country athletes over an 8 kilometre race.

Caroline Ehrhardt (Espanola, ON) also had an impressive rookie debut at the
CIS Championships, earning fourth place finishes in both the women's long
jump and triple jump.  Competing for the University of Western Ontario
(UWO), Ehrhardt set a new indoor personal best of 5.81 metres in the long
jump and also set a season's best of 12.38 metres in the triple jump event.
Her triple jump mark also broke the UWO school record in the event.
Video of Proudfoot's 1500m race can be seen at:
http://www.trackie.com/track-and-field/media/2011-cis-track-and-field.php?event=5
Full CIS Results:
http://pages.usherbrooke.ca/ssap/index.php?scores=inljf31gs5+ggg==
Posted by plabrecque at 9:51 AM

Congratulations to Devon Kershaw, who has won a first-ever gold medal for male
skiers at a World XC Skiing Championships!

Devon and partner Pierre Harvey won their medal in Norway in a race in which two
partners make three loops of a 1.5 km track. Devon moved from the back of the
pack to hand off Harvey in 3rd place at the final exchange. Harvey brought it
home for gold in an exciting finish, outkicking the favourite Norwegions on
their home course (in front of the Norwegian king).

And here's video. It's not in English, but the video quality is great. My
suggestion is that you go to the end of the video first, to help you identify
the Canadians' racing gear:

Posted by plabrecque at 9:20 AM