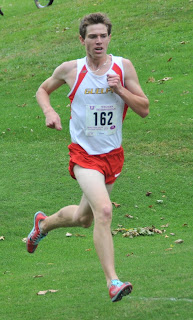 Track North Athletic Club's Ross Proudfoot (Lively, ON), competing for the
University of Guelph bettered the Canadian Interuniversity Sport (CIS)
national qualifying standard for the 1500m event this past weekend at the
GaREAT College Invitational in Geneva Ohio this past weekend.

Competing in the traditional mile event (1609m) against several top NCAA
ranked schools, Proudfoot finished 10th in a time of 4 minutes 8.75 seconds.
This time is equivalent to a 3:50.55 1500m and is an indoor personal best
for Proudfoot and qualifies him to compete at the CIS Indoor National
Championships in Sherbrooke, March 10-12.

"The injuries that slowed me down in December and early January have
thankfully healed up and I'm starting to feel much stronger now. I ran a
very even race today and felt comfortable running fast again.  I really only
a few weeks of solid interval training under my belt this season so I'm
excited to see what I can do in my upcoming races" commented Proudfoot.

Proudfoot continues to train for both the Canadian university indoor track
season in addition to preparing to compete for Canada at the North
American-Caribbean Cross Country Championships being contest in Trinidad on
February 19th.

Posted by plabrecque at 5:17 PM