Proudfoot runs to silver in Montreal 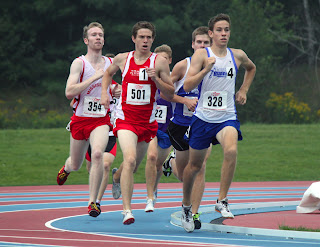 Track North Athletic Club's Ross Proudfoot (Lively, ON) competing for the
University of Guelph ran to a silver medal in the 3000m event at the McGill
Team Challenge Indoor Track and Field Meet held in Montreal this past
weekend.

Proudfoot finished the race in a time of 8 minutes and 22.33 seconds, a new
personal best time over the 3 kilometre distance.  Proudfoot's Guelph
teammate, Alex Genest won the race in 8:14.96.

This was Proudfoot's first indoor track race of the season as he has been
hobbled by injuries since winning the National Junior Cross-Country
Championship last November.

Proudfoot commented: "I didn't really know what to expect for the race
because I didn't know how fit I was coming in.  I've really only had one
solid track workout this season.   The race plan was to run with the top
ranked guys in the race and see what I could do in the last kilometer. We
went through two kilometres slower then planned but I ended up having a
really strong final kilometer to finish in a new personal best time."

Proudfoot will continue to train for both the university indoor track season
in addition to preparing to compete for Canada at the North
American-Caribbean Cross-Country Championships on February 19th.